ESBE INVESTS IN THE FUTURE AND BUILDS ANOTHER 2,700 SQUARE METERS

ESBE continues to invest in Sweden and adds another 2,700 square meters to the existing 15,000 sqm. Take part in the news by reading the full press release 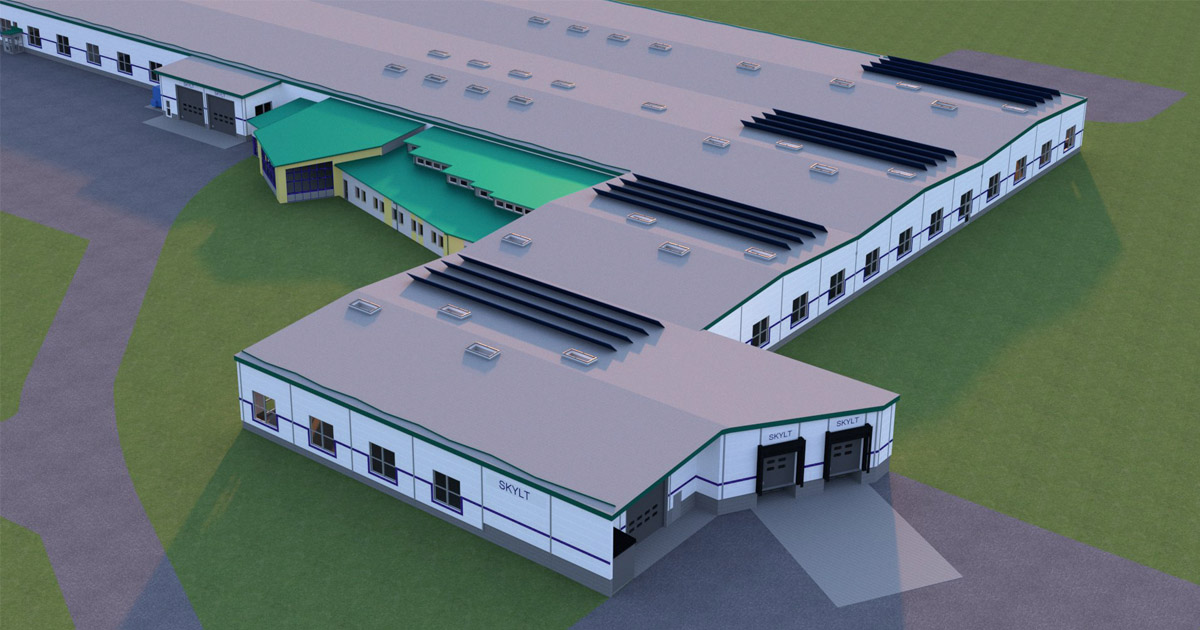 The construction, which is one of ESBE’s major extensions of all time, is a significant and important project in many ways. This will result in not only improved material flows and thus improved production efficiency, but also improvements in ergonomics and personal safety. The large floor spaces will provide the potential for expanded production, giving ESBE additional possibilities for growth. ESBE is in a very expansive stage right now, and despite the coronavirus pandemic, all-time-high sales in 2021 have been a recurring phenomenon.

The construction has progressed at a rapid pace during the months of June and July. Insulation of waterproofing and the self-supporting roof in sheet metal came into place, as well as all the lightweight concrete walls.

Friday of week 28, just before the beginning of the vacation, floor casting was completed for the 2,700 square metre factory space. An intensive work performance lasted between 5 in the morning am until 10:30 at night to fill the floor with seamless fibre reinforced concrete. A method where no rebar rods are used, which provides a durable floor with flexibility without joints. 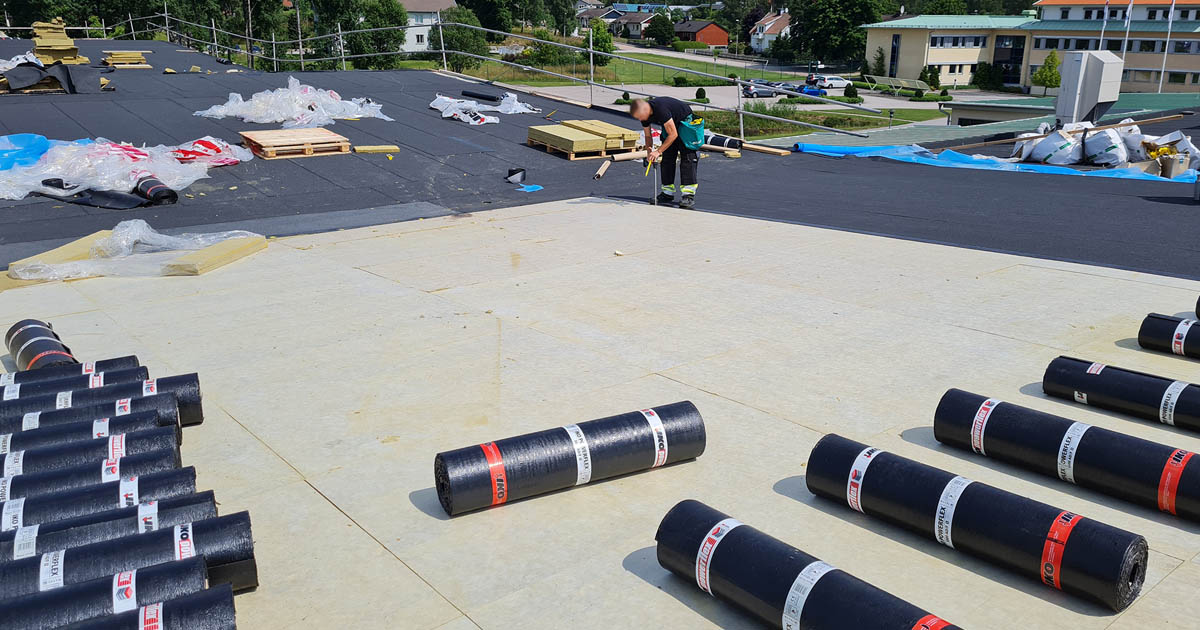 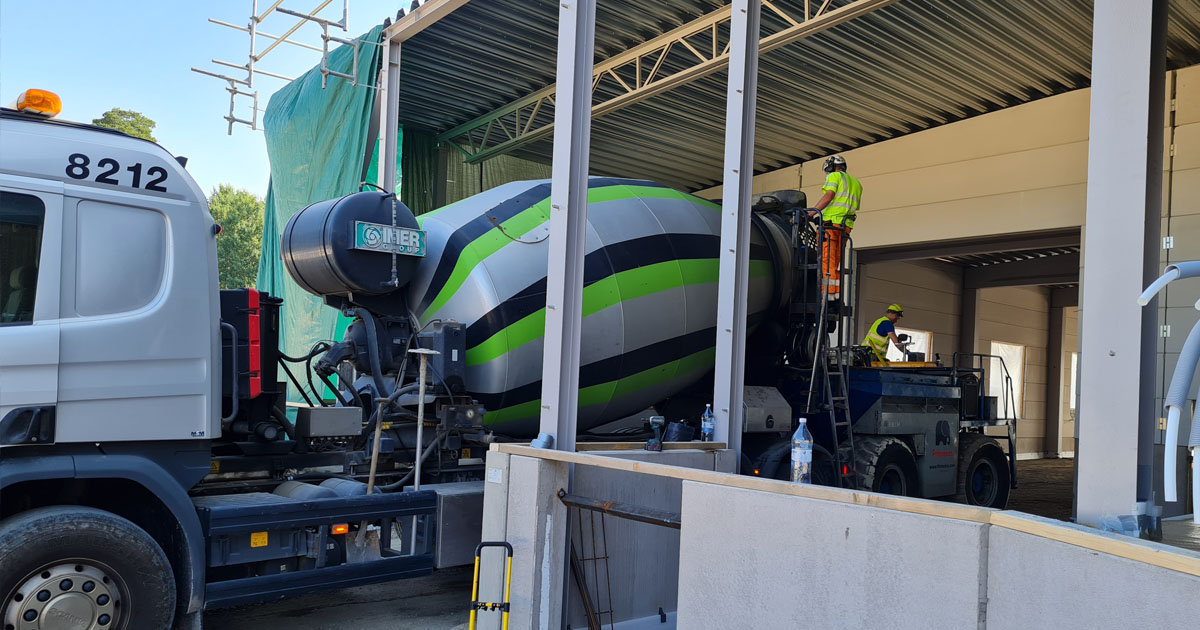 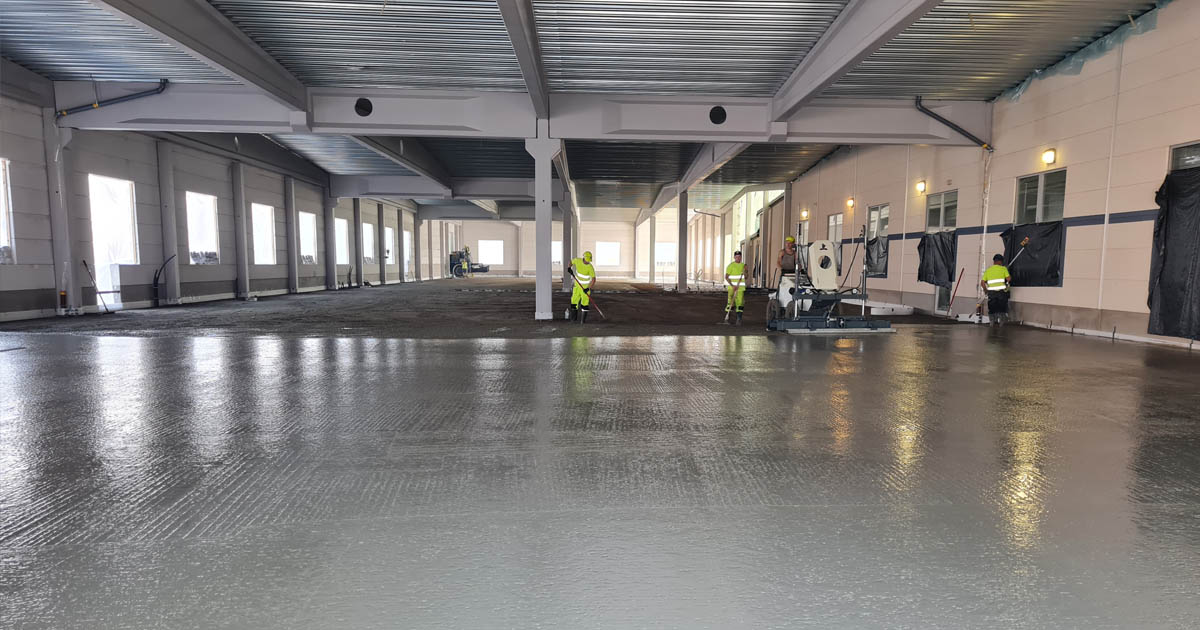 Now in August, all installers are in place – electricians, plumbers, installers of ventilation and painters – to begin the completion of the construction.
During the week, work on establishing a technology room for, among other things, a larger ventilation unit, will also be started.

Presently today, the production is crowded. For example, at the circulation unit assembly, where the production rate has increased significantly in recent years, but not the floor space. The fitters are looking forward to a move to get more space and more customised logistics in the operations.
The staff at the unloading sees many advantages with the new location of the department. There is some concern about how the relocation of the large warehouse lifts will be resolved and not least a concern that they will not be in the middle of production in the future where the social communication with the departments around them works great and will be missed. But everyone is looking forward to the significant efficiency increases that is the goal of the move and where two cargo storage units are added to the new building under construction. From here, truck drivers themselves will be able to load goods while ESBE staff will be able to pack and prepare orders on a larger floor space.

In the new floor plan, the goods reception for purchased subcomponents will be directly adjacent to the assembly departments, which will result in a significant reduction in the need for forklift transport through the factory. The larger area for incoming goods and the shorter distances to move the goods also establish a safer workplace, something which is a positive and long-awaited change at both the freight reception and those who work among forklifts and materials.

It’s not only departments that are to be moved. A good solution in terms of cost and environmental considerations is that eight window sections and a smaller entrance door will be moved to the outside of the new building under construction from the wall that then becomes the new inner wall. 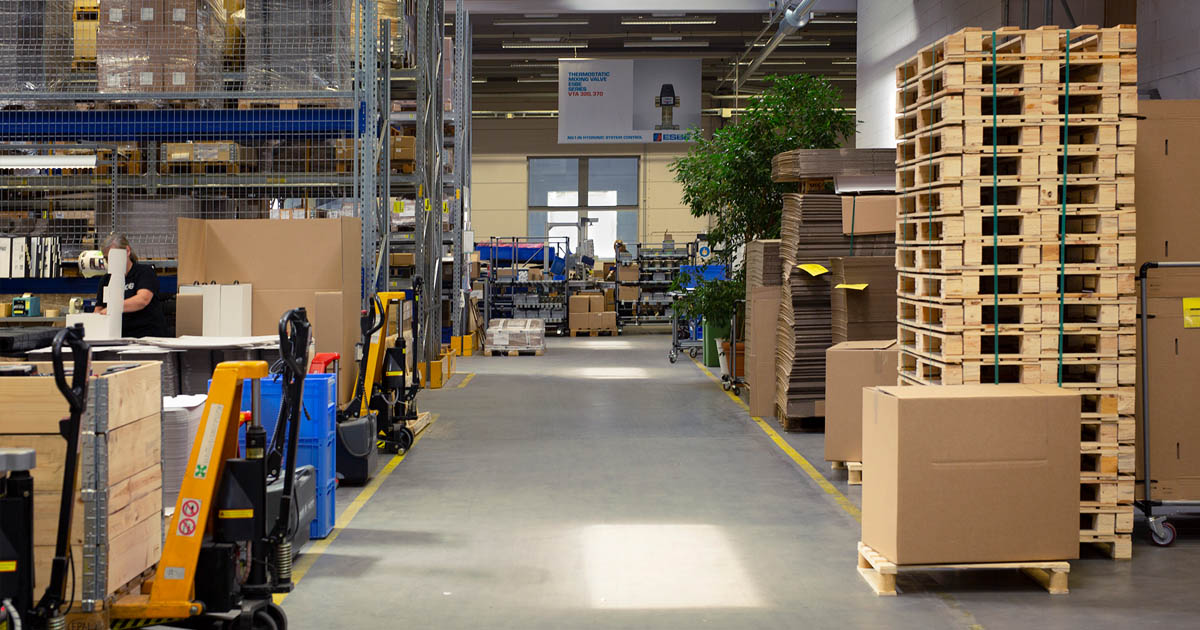 Windows that will be replaced by an entryway into the new building.

The factory layout for the assembly departments has been approved, and from now on a detailed and timed planning for the actual relocation of the directly affected assembly departments commences.
After an approved final inspection in early/mid-November, the first department is expected, if everything goes as planned, to move and the plan is that it will take a maximum of one week to perform.

The plan with the goal of everything being moved in and ready in Q1 of 2022 remains in place, as well as the hopes that the positive reception of ESBE’s products will continue. 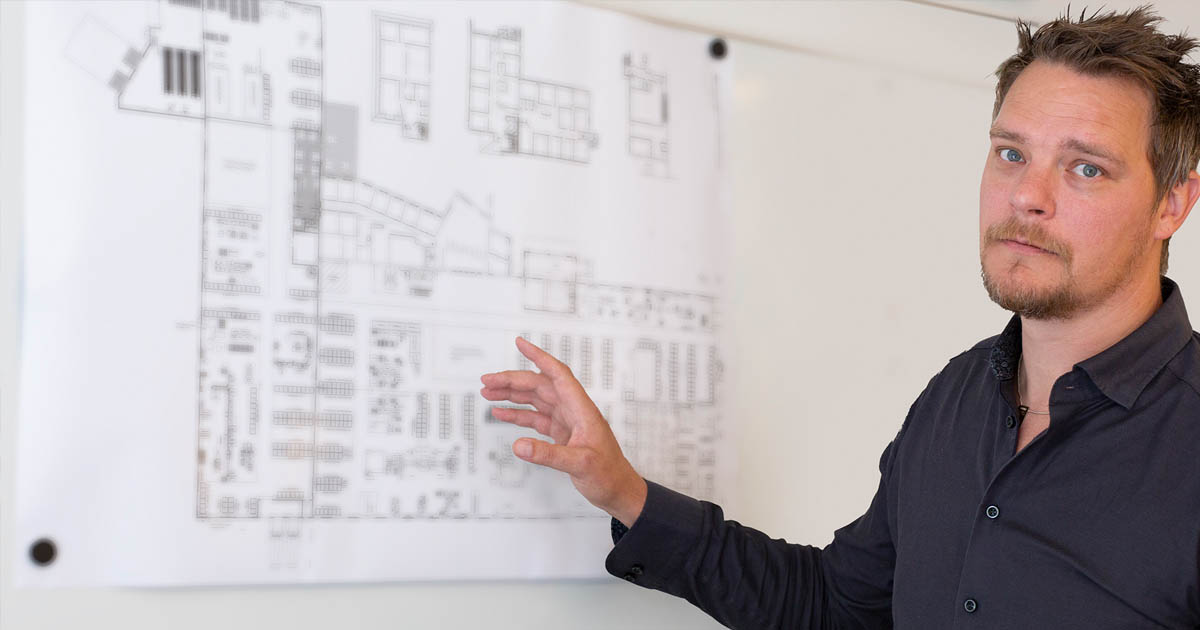 Christian shows the factory layout that has been developed in collaboration with both the trade unions and affected employees. 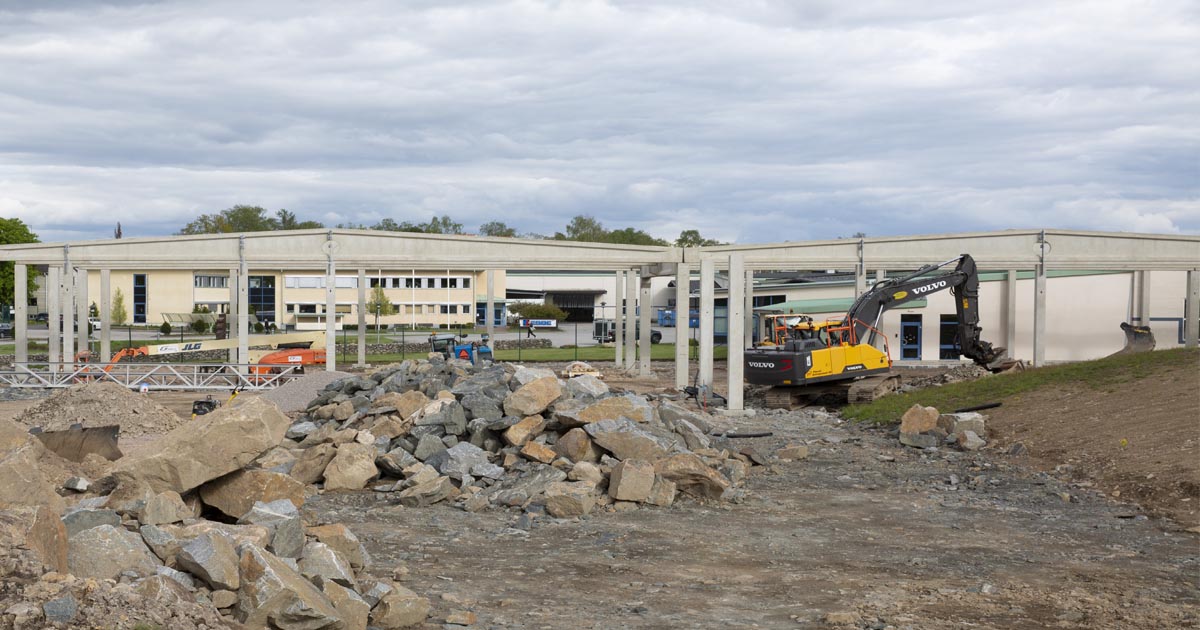 The construction at ESBE is now in full swing and things are happening every hour. On a daily basis, around three trucks arrive from Nybro Cementgjuteri with the concrete elements forming the frame.
To cope with continued expansion, 2,700 square meters will be added to ESBE's factory in Reftele. The new part is expected to be taken into use at the turn of the year 2021/2022.
ESBE Construction 2021 is underway!

The new construction at ESBE is in full swing and things are now happening on an hourly basis. Project Manager Janne Hakkarainen says that project planning has been meticulously carried out in order to make the best use of time, machinery and personnel. It is incredibly important that the project proceeds according to schedule.

Around three trucks arrive every day from Nybro Cementgjuteri, which is where the concrete elements forming the frame of the 2,700 square metre hall are manufactured.

From the moment the first truck delivered the first load of prefabricated concrete elements, the workers have been busy erecting and assembling. Right now, four craftsmen are on-site in Reftele assembling the concrete elements, which are lifted into place using the huge construction crane. Meanwhile, the next truck loaded with concrete elements is on the way. Lift, assemble, lift, assemble, and so on. Janne and Nybro Cementgjuteri communicate constantly to ensure that loading and unloading take place at precisely the right time.
•    The maximum height of the blue construction crane is 66 m and it can lift 60 tonnes.
•    One roof truss is 24 metres long and weighs 10.3 tonnes, one pillar weighs approx. 1.8 tonnes.
•    16 roof trusses and 39 pillars will be installed in the building.
•    There are 151 sections of prefabricated concrete in total with a combined weight of 290 tonnes.
Enormous weights, large dimensions and impressive craftsmanship! 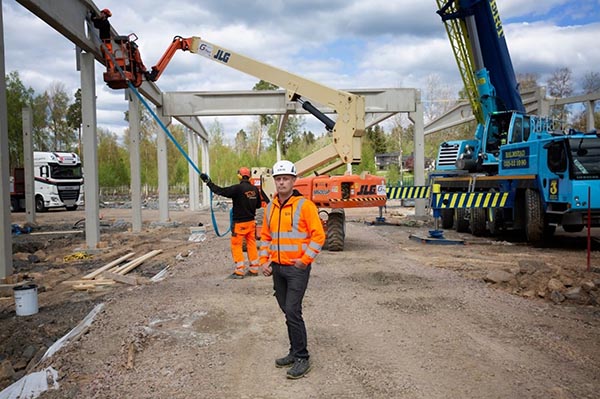 The frame is divided into four sections, two of which were started on Wednesday afternoon during our visit to the construction site. The fitters assemble the blocks using bolts and these are then further reinforced with concrete to achieve a stable underlying construction. If everything goes according to schedule, it will be completed in 10 days’ time, which is next week (week 21).

The groundwork for, among other things, the sewer trunks and drainage pipes is being carried out in parallel with construction.
Earlier in the spring, the ditch along the entrance road was drained and filled up to provide accessibility for trucks delivering material to the site. The entrance is also part of the upcoming logistics solution for traffic in ESBE’s factory area. 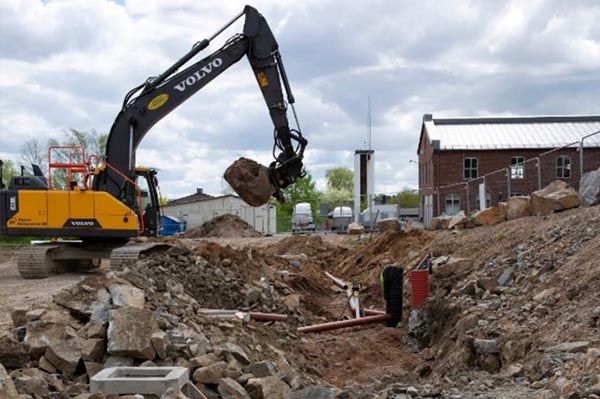 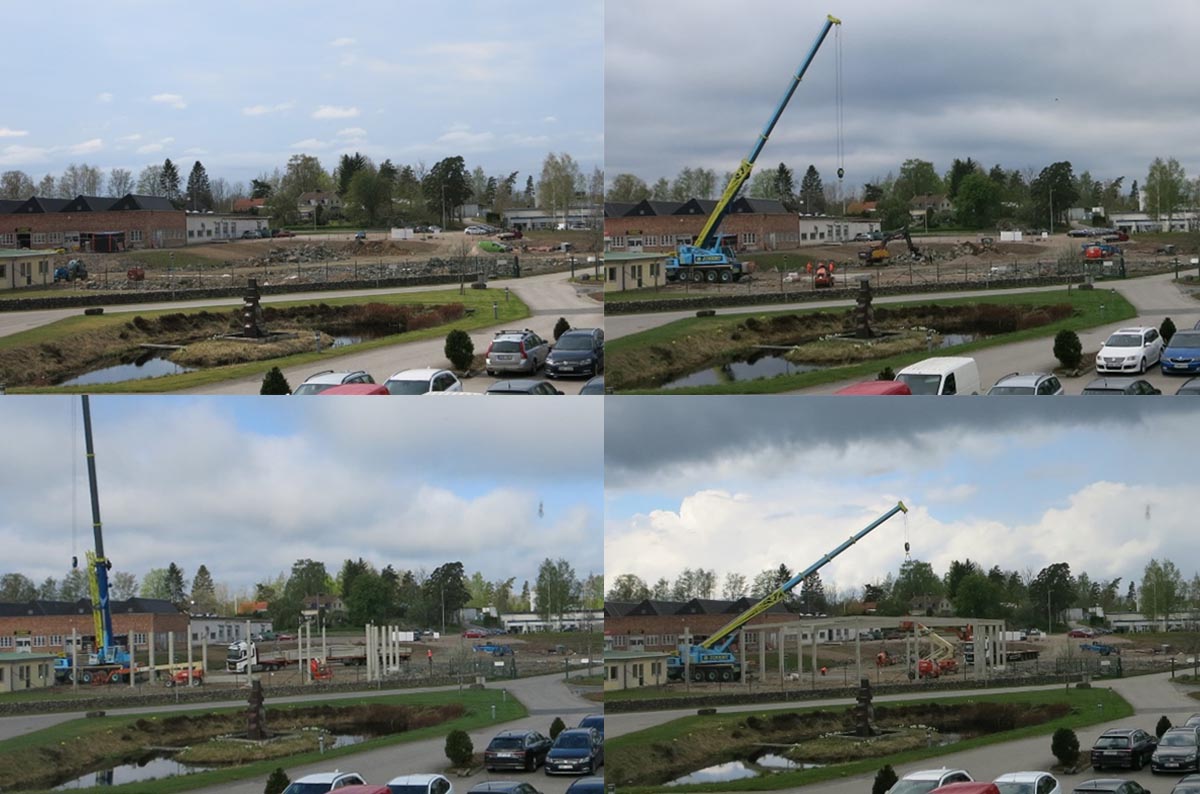 The construction process can be easily followed in many ways and it’s exciting when things happen! 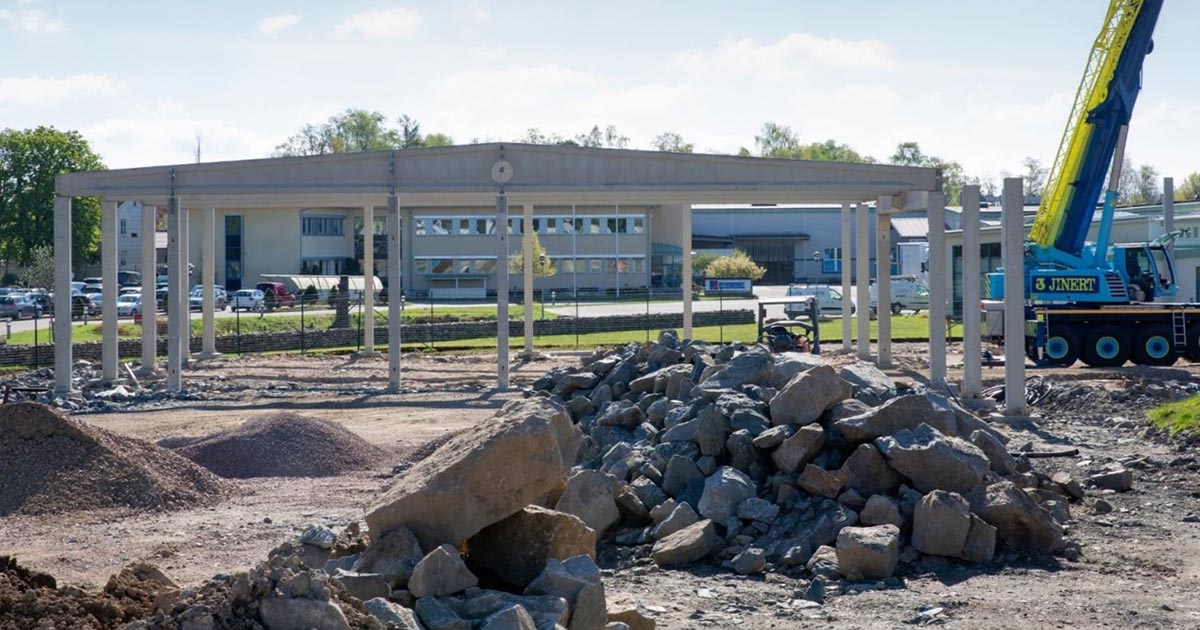 2700 square meter is added to ESBE's factory in Reftele to cope with continued expansion. If everything goes as planned, the next phase will start in just over a week, where a load-bearing roofing sheet will be installed at the same time as construction of the exterior elements gets underway. The entire building with the new premises is planned to be taken into use at the turn of the year 2021/2022. 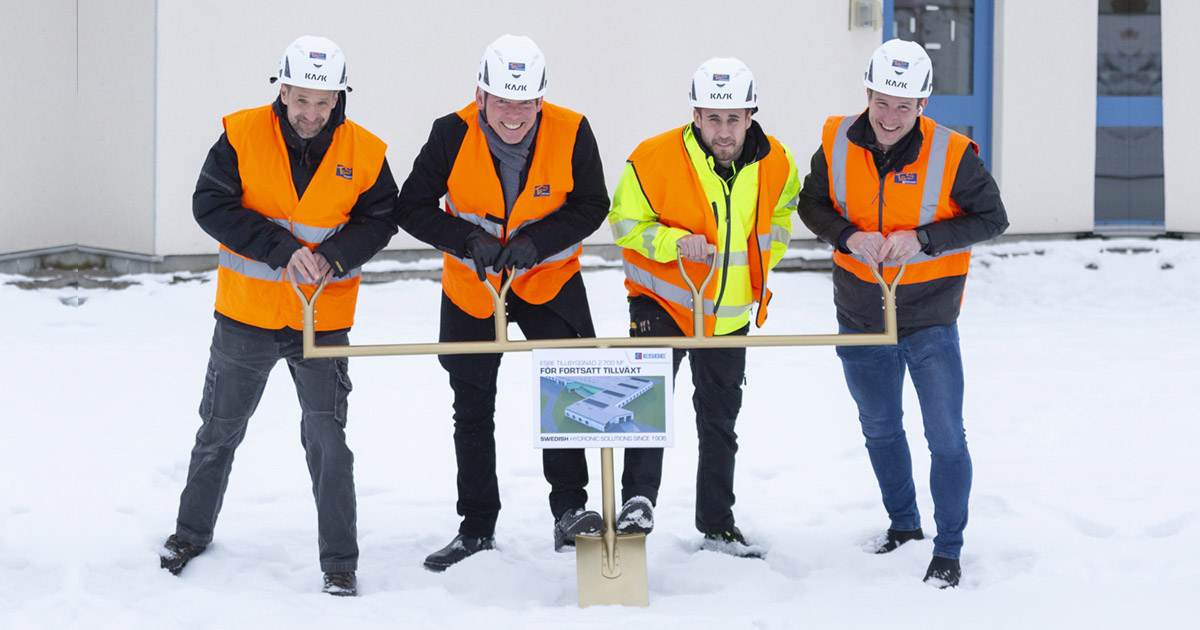 The first ground-breaking ceremony is completed and now 2,700 extra square meters will give ESBE space for better freight flows as well as increased areas for production.

Read what the President and CEO, construction company and project manager say about the expansion and its possibilities.